- Hailey, ID, a small community, made the list for the first time. Hood River, OR, and Glenwood Springs, CO, reappear on the small community list following a hiatus. Jackson, WY-ID, Bennington, VT, and Heber (formerly Summit Park), UT, have made the list every year since 2015.

- Two new medium communities are on this year’s top-10 list of medium communities – Wilmington, DE-MD-NJ, and Oxnard-Thousand Oaks-Ventura, CA. Santa Fe, NM, San Rafael, CA, and Pittsfield, MA, have appeared on the list of top communities every year since 2015, while Bozeman, MT, and Traverse City, MI, reappear after a hiatus.

- One new community made our top-20, large metropolitan area list for the first time: Cincinnati, OH-KY-IN. Fourteen large communities have made the list every year since 2015, although their rankings have shifted over time.

Fluctuations in the rankings occur from year to year for several reasons: 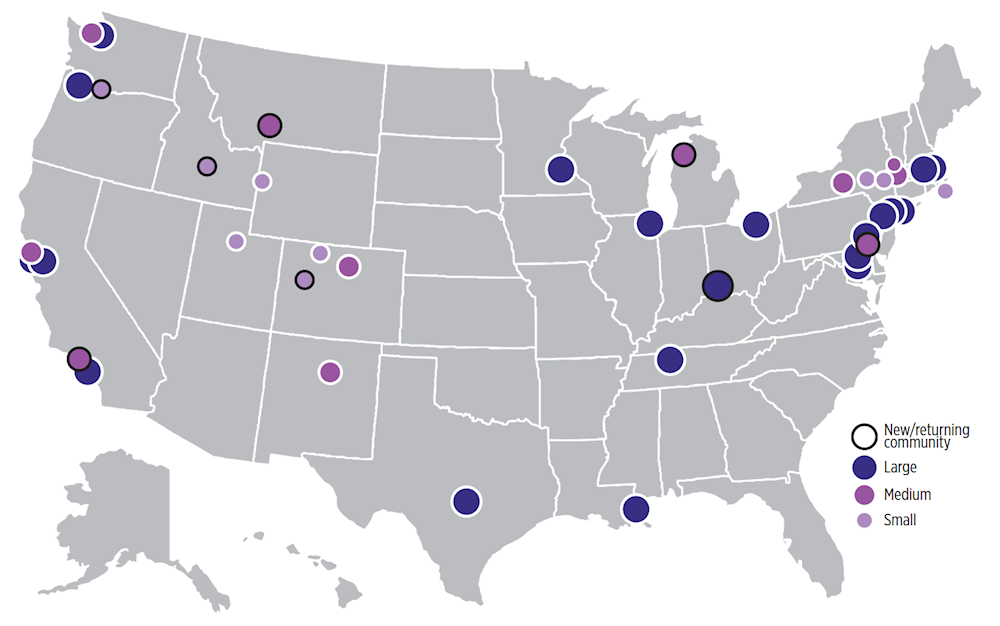 Given the symbiotic relationship between arts organizations and their communities, the Arts Vibrancy Index (AVI) can help arts leaders, businesses, government agencies, funders, and engaged citizens understand the overall intensity and capacity of the community’s arts and culture sector. Past AVI reports have helped communities get the recognition they deserve from their mayors, city council members, and state legislators. Arts leaders have informed us that they use the AVI reports and interactive map on our website to consider where to relocate their operations and what markets are ripe for touring performances or exhibitions. Communities can benchmark themselves against an aspirational set of communities and understand what sets them apart by examining the underlying dimensions of demand, supply, and public support for arts and culture. Numerous funders have engaged with the AVI data to better understand how investments to increase arts vibrancy might be best directed in the communities they serve, given existing strengths and opportunities for improvement. The AVI’s multidimensional framework provides insights as to why two cities that seem very different on the surface might be close to one another in the ranking.

There are valuable frameworks that chronicle a neighborhood’s cultural resources such as the Social Impact of the Arts Project’s Cultural Asset Index, the National Endowment for the Arts’ Exploring Our Town Projects, and the Baltimore-focused interactive tool GeoLoom. There are published rankings that assess the strength of arts and culture as part of a larger look at a city’s attractiveness and livability, and others that focus on the arts and cultural sector’s role as part of creative placemaking. We share some metrics with these other studies and tools but, in keeping with SMU DataArts’ mission, our ranking focuses solely on arts and culture with heavy emphasis on the nonprofit sector.

The measures are drawn from a review of the existing literature on arts and culture indicators and from our Model of the Arts & Culture Ecosystem (see Figure 2), which features a complex and interdependent set of relationships among: 1) artists and arts organizations; 2) their communities; and 3) government funding that influences the production and consumption of arts and culture.

When we look at factors that affect the performance of arts and cultural organizations in our quarterly reports and in the Arts Vibrancy Map online, we include socioeconomic and demographic characteristics and other leisure activities like cinemas, professional sports teams, and zoos. We have intentionally omitted these factors from the AVI Report in order to focus the rankings as purely as possible on arts and cultural activity. It would be inequitable, for example, to penalize a community that is relatively low on per capita income but very strong on arts providers, or to elevate a community that has a relatively high number of professional sports teams and restaurants but few artists or arts organizations.

Communities are defined by the Office of Management and Budget (OMB) as MSAs, or Micro- and Metropolitan Statistical Areas. As described on the OMB website:

“Metropolitan Statistical Areas have at least one urbanized area of 50,000 or more population, plus adjacent territory that has a high degree of social and economic integration with the core as measured by commuting ties.

Micropolitan Statistical Areas have at least one urban cluster of at least 10,000 but less than 50,000 population, plus adjacent territory that has a high degree of social and economic integration with the core as measured by commuting ties.”[7]

Micro- and Metropolitan Statistical Areas are comprised of one or more counties. For this reason, readers will find descriptions of countywide activity in the latter half of this report. The OMB is careful to point out that, since MSAs encompass entire counties, they do not equate to an urban-rural classification since many counties hold both rural and urban characteristics.[8]

The Census Bureau and other government agencies use MSAs when collecting, organizing, and analyzing data. Focusing on MSAs provides a nationally standardized, objective approach to delineating markets. MSAs are frequently centered on one large city or twin cities, but they capture the network of suburbs that rise up around a city or town rather than considering them separately. A key feature, as quoted above, is the “high degree of social and economic integration with the core as measured by commuting ties.”

For some, the notion of MSAs feels off target because they think about the character of their city in very different terms than they do that of surrounding suburbs or the rest of the county. And yet visitors, audience members, artists, and employees of arts organizations live in the surrounding suburbs, particularly when real estate prices make living in the urban core cost-prohibitive. Off-site production facilities and storage are frequently located in less expensive parts of town that may or may not fall within the city’s official boundaries. Main airports often lie outside of the city limits and yet they serve arts and cultural organizations in the city through air transportation of artists, visitors, and materials. For these reasons, the OMB’s approach has practical implications for arts and cultural ecosystems.

Although all measures are calculated on a per capita basis to examine as level a playing field as possible, we report rankings on cities in three size categories rather than compare cities of vastly different size: Large MSAs (and Metro Divisions) with populations over 1,000,000; Medium MSAs (and Metro Divisions) with populations of 100,000 to 1 million; and Small MSAs, all of which are Micropolitan Statistical Areas. Taking a per capita approach, and capturing the activity of MSAs rather than cities (i.e., urban cores only), sometimes leads to surprising results.

With this report, our goals are to provide information about metrics that are meaningful and consequential, and to stimulate a conversation about how cities vary in their arts vibrancy and the forms vibrancy can take. Arts Providers are a gauge of supply and include the number of independent artists, arts and culture employees, nonprofit arts and cultural organizations, and arts, culture, and entertainment firms in the community. Arts Dollars represent a gauge of demand for nonprofit arts and cultural programming, including earned revenue from program activities, contributed revenue supporting the arts, total compensation to artists and staff, and total expenses. Government grant activity is a gauge of public support for arts and culture, captured as the number of state and federal grants and total government grant dollars in the community.

Table 4 shows what we measured, the sources of data for each measure, and how we weighted each area. We weight Arts Providers and Arts Dollars more heavily than Government Support because of their critical importance to arts vibrancy, as they are indicators of supply and demand. We adjust revenue and expense figures by a cost-of-living index.

*Adjusted by a cost-of-living index

Because there are 947 unique MSAs and Metro Divisions, any ranking between 1 and 95 still puts that community in the top 10% of cities on that measure, and a ranking of 96-190 means the community is in the top 20th percentile, etc. Being ranked in the top 10 roughly means being in the top 1%.

Rankings are ordinal measures – i.e., who came in 1st, 2nd, 3rd, etc. This provides the order of the results but no information about the degree of difference between the raw measures. This is an important distinction to keep in mind. For example, the community ranked 1st on independent artists might feature a population that is 10% independent artists while the 2nd place community has only 5% of the population who are independent artists and the 3rd place community has 4.7% independent artists. The degree of difference between cities 1 and 2 is much bigger than the difference between cities 2 and 3, and yet the ranking makes them appear to be evenly spread apart. This is why the overall arts vibrancy ranking is not an average of the rankings on the three component metrics and the three component metrics are not an average of the rankings on their underlying measures.v We don’t average rankings, we average raw scores.